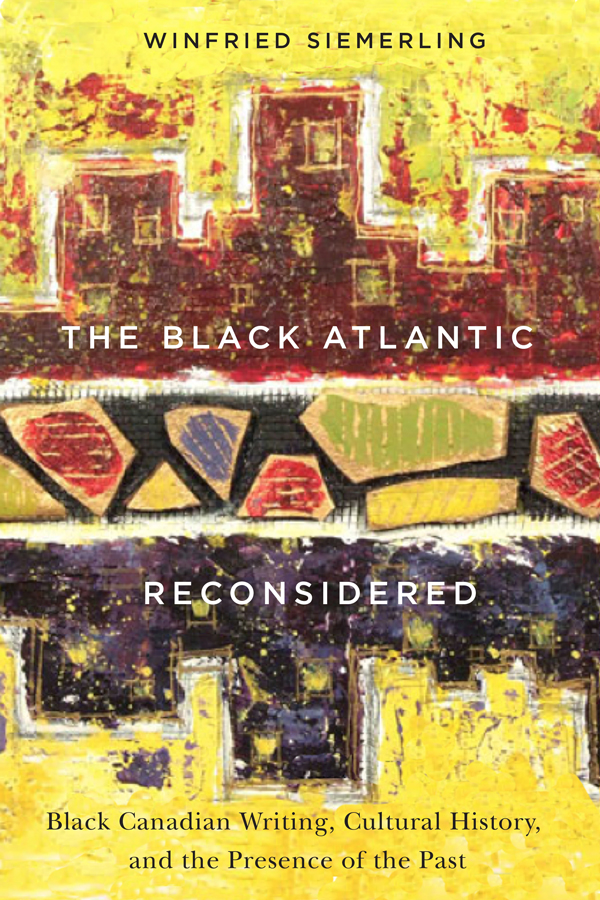 “Winfried Siemerling’s thorough and thoughtful book helps to fill a mighty void, and will open the door to more conversations about one of Canada’s most vital, yet understudied literary communities.”

“Mining the deep structures of Canadian historiographies, Siemerling lovingly and masterfully provides a prehensile reading of the virtually inexhaustible richness of African Canadian literary (and musical) culture-its past as well as its quite stunning contemporaneity.”

“Winfried Siemerling’s The Black Atlantic Reconsidered is the book that students of the black literary experience in the New World have been waiting for, without fully appreciating it was missing, for generations.”

“Winfried Siemerling’s The Black Atlantic Reconsidered: Black Canadian Writing, Cultural History, and the Presence of the Past is a ground-breaking and consequential volume. … Poised to galvanize scholarly and classroom conversations on this understudied corpus, Siemerling’s book, which analyzes black Canadian literary representations of history, is history-making in its own right.”

Readers are often surprised to learn that black writing in Canada is over two centuries old. Ranging from letters, editorials, sermons, and slave narratives to contemporary novels, plays, poetry, and non-fiction, black Canadian writing represents a rich body of literary and cultural achievement.

The Black Atlantic Reconsidered is the first comprehensive work to explore black Canadian literature from its beginnings to the present in the broader context of the black Atlantic world. The volume traces the evolution of black Canadian witnessing and writing from slave testimony in New France and the 1783 “Book of Negroes” through the work of contemporary black Canadian writers including George Elliott Clarke, Austin Clarke, Dionne Brand, David Chariandy, Wayde Compton, Esi Edugyan, Marlene NourbeSe Philip, and Lawrence Hill.

Arguing that black writing in Canada is deeply imbricated in a historic transnational network, the book explores the powerful presence of black Canadian history, slavery, and the Underground Railroad, and the black diaspora in the work of these authors. Individual chapters examine the literature that has emerged from Quebec, Nova Scotia, the Prairies, and British Columbia, with attention to writing in both English and French.

A major survey of black writing and cultural production, The Black Atlantic Reconsidered brings into focus important works that shed light not only on Canada’s literature and history, but on the transatlantic black diaspora and modernity.

Created for individual readers, courses, and research and discussion groups, the companion site blackatlantic.ca is meant for the benefit of anyone interested in black Canadian writing and culture. Many of the primary texts that are discussed in The Black Atlantic Reconsidered—including a majority of the early ones—are freely available on the internet. Together with historical documents, information about authors, scholarly and newspaper articles, and other relevant websites, these sources have been collected here for ease of reference and convenience.

The materials under the Documents and Sources tab are arranged by chapter and the order of appearance in the text. Under the same tab, a list of Canadian slave narratives presents links to digital full-text editions where available, and a further section contains other relevant sites. The entries under the Authors tab are divided into historical and contemporary authors, offering links to author websites and standard resources about individual writers. The Detailed Table of Contents provides further orientation by augmenting the printed version of the Table with two additional layers of sub-chapter headings.