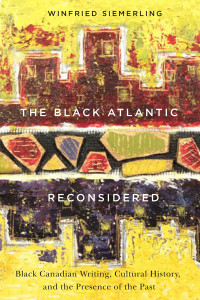 “Winfried Siemerling’s The Black Atlantic Reconsidered is the book that students of the black literary experience in the New World have been waiting for, without fully appreciating it was missing, for generations. Not only does it open our eyes to the monumental importance of black Canadian writing, from enslavement in New France to North Star escapes to the explosion in diasporic expressions from the 1960s to today; it forces us to expand our understanding of the boundaries of the African journey in the New World upward, to where they belong and always have been. Siemerling’s scholarship on Canada’s place in the wider black Atlantic should be read and taught for many years to come.”

“The Black Atlantic Reconsidered offers a meticulously researched, contextualized and engaging exploration of Black Canadian writing. A must-read for any person who desires a comprehensive meditation on Black Canadian writing past and present. Winfried Siemerling’s thorough and thoughtful book helps to fill a mighty void, and will open the door to more conversations about one of Canada’s most vital, yet understudied literary communities.”

“This powerfully rendered text brings us closer to a definitive understanding of the entire “circum-Atlantic network” in its critical interrogation of the Canadian scene-its histories, cultures, and literatures; routed through the times and spaces of Canada, we come upon the black Atlantic once again as a reconfigured repertoire of actual and archival resources that elaborate upon and expand our identitarian signatures. Mining the deep structures of Canadian historiographies, Siemerling lovingly and masterfully provides a prehensile reading of the virtually inexhaustible richness of African Canadian literary (and musical) culture-its past as well as its quite stunning contemporaneity.”

“Winfried Siemerling’s The Black Atlantic Reconsidered: Black Canadian Writing, Cultural History, and the Presence of the Past is a ground-breaking and consequential volume. It examines black Canadian writing in both English and French from the early eighteenth century to the present, contextualizing it vis-à-vis the nation-state and the transnational black Atlantic. Poised to galvanize scholarly and classroom conversations on this understudied corpus, Siemerling’s book, which analyzes black Canadian literary representations of history, is history-making in its own right.”